IU will host a virtual panel presentation and discussion on Friday, January 29 from 11 – 12:30 EST that will cover the spectrum of trauma- and prehospital care-related research funded by the government.  Presenters will include CDR Travis Polk, the current director of the Department of Defense (DoD) Combat Casualty Care Research Program as well as Dr. Jeremy Brown, Director of the Office of Emergency Care Research at the NIH.  Presentations will be followed by a moderated discussion on priorities, future directions, and challenges in this critical area of research.  To add additional perspective to the panel, a physician researcher from industry will also join the discussion portion of the event.

The DoD is often seen as the home for trauma care research in the federal government, yet what is somewhat less known is that the NIH is also active in funding trauma and emergency care research.  This seminar aims to clarify the federal research funding landscape in trauma, to discuss future priorities, and how more researchers can contribute to this important area.

Who Should Attend: Clinical and translational researchers as well as basic scientists who work across the domains that directly or indirectly touch upon trauma care.

Register here.  The event will be broadcast via Zoom.

Jeremy Brown, MD – Dr Jeremy Brown is an emergency physician and Director of the Office of Emergency Care Research at the National Institutes of Health. Jeremy grew up in London, studied medicine at University College, London and trained as an emergency physician at Boston Medical Center. Before joining the NIH, he was the Research Director in the Department of Emergency Medicine at The George Washington University in Washington, DC.  While at GWU, Jeremy served as the founding director of the ED HIV screening program, received three NIH grants to study a new therapy for kidney stones, and taught undergraduate courses in clinical research and science and religion. Jeremy is the author of over forty peer-reviewed papers and four books, including two textbooks of emergency medicine published by Oxford University Press. He and his wife, Erica live in Silver Spring, Maryland. They have four children, three more by marriage and two beautiful grandchildren.

CDR Travis Polk, MD, FACS – A native of Phoenix, Arizona, CDR Travis Polk graduated from Norwich University with a Bachelor of Science in Nursing and was commissioned through the Naval Reserve Officer Training Corps Scholarship program in 1997. He attended the Uniformed Services University of the Health Sciences on active duty and graduated with a Doctor of Medicine in 2001. Following completion of a surgical internship at Naval Medical Center Portsmouth in 2002, he served as the Medical Officer for USS FORT MCHENRY (LSD-43) homeported in Sasebo, Japan from 2002-2004 completing several underway deployments with the Forward Deployed Naval Forces in the western Pacific.

CDR Polk completed General Surgery residency in 2008 at Naval Medical Center Portsmouth, Virginia.  Returning to Japan from 2008-2010, he served as a staff general surgeon at Naval Hospital Okinawa and deployed with the Commander- Joint Special Operation Task Force Forward Surgical Team in Tarin Kowt, Afghanistan. Following this overseas tour, he completed fellowship training in traumatology, surgical critical care and emergency surgery at the Hospital of the University of Pennsylvania in 2012.  CDR Polk returned to Naval Medical Center Portsmouth and served as the Surgical Director of the Healthcare Simulation and Bioskills Training Center and Program Director for Wounded Warrior Care. During this time, CDR Polk also established a translational research experience for the general surgery residency program and a military-civilian trauma partnership with Eastern Virginia Medical School. In 2014 and 2019, CDR Polk deployed as Chief of Trauma at the NATO Role 3 Multinational Medical Unit in Kandahar, Afghanistan.   From 2017-2020, he served as Director of the Navy Trauma Training Center at Los Angeles County + University of Southern California Medical Center where he trained US Navy surgical teams for deployment.  In 2020, CDR Polk became the first Navy medical officer to direct the DoD’s Combat Casualty Care Research Program based in Fort Detrick, Maryland.

CDR Polk is an Assistant Professor of Surgery at the Uniformed Services University and is board certified in general surgery with an added qualification in surgical critical care. He is the Navy State Chair for the American College of Surgeons Committee on Trauma, Chair of the Navy Trauma Clinical Community and represents the Navy on the Defense Committee on Surgical Combat Casualty Care.  His academic and research interests include mentoring, surgical simulation and alternative devices for the treatment of tension pneumothorax. CDR Polk’s personal awards include the Meritorious Service Medal (four awards), the Navy Commendation Medal (two awards), and Surface Warfare Medical Department Officer qualification device.

Ross Donaldson, MD, MPH, CTrop, FACEP – Dr. Donaldson is President & CEO of Critical Innovations LLC, as well as an Associate Professor of emergency medicine and epidemiology respectively in the UCLA Schools of Medicine and Public Health. Triple-boarded in Emergency Medicine, pre-hospital Emergency Medical Services (EMS), and Clinical Informatics, Dr. Donaldson has been principal investigator on over $30 million dollars’ worth of funding, with research focusing on emergency, critical, and trauma care. He is also the creator of WikEM, the world’s largest and most popular emergency medicine open-access reference resource, and the inventor of multiple patented medical technologies. He has been featured as an expert on CNN, BBC, NPR, and other media outlets, and an invited speaker at over 100 national and international conferences, including at Medical Design & Manufacturing, Department of Defense, and various think tanks. He has worked around the globe, frequently in areas of conflict and recent disaster, and been the lead architect of national emergency care plans in several countries. For five years in Iraq alone, he led the instruction of over ten-thousand surgeons, physicians, EMTs, nurses, and community members, while spearheading the development of pre-hospital and hospital-based emergency and trauma systems for the country, for which he received the Humanitarian Award from the California chapter of American College of Emergency Physicians. Dr. Donaldson has worked for over a decade at the Harbor-UCLA Medical Center, one of Los Angeles’ main Level I trauma centers, where he serves as the Director of the Emergency Medicine Global Health Program. He is also the critically acclaimed author of The Lassa Ward, a memoir about international humanitarian work and, among other honors, been named Los Angeles’ Top Emergency and Trauma Doctor from the Los Angeles Business Journal and the inaugural recipient of the FOAMed Excellence in Education Award from the Society for Academic Emergency Medicine.

Todd McKinley, MD – Dr. Todd McKinley joined the orthopedic trauma team at Indiana University Health Methodist Hospital after serving with a busy academic practice at the University of Iowa. Drawn to trauma during his residency, he has been in practice since 1999. Dr. McKinley states that his practice philosophy is “working with complete commitment,” which he finds is completely liberating. Dr. McKinley is married and has two sons who are accomplished musicians and athletes.

Dr. McKinley’s clinical interests include polytrauma, pelvic and acetabular surgery, infection and young-adult hip deformity. He has performed more than 400 periacetabular osteotomies. He has been principal investigator on six peer-reviewed grants, including three major grants from the Centers for Disease Control and Prevention, National Institutes of Health and the Department of Defense. Dr. McKinley was a finalist in 1998 astronaut selection process, was appointed chairman of the Orthopaedic Trauma Association Research Committee and is a member of the Orthopaedic Research Society.

Research Jam Was All IN At The Indiana State Fair

3 minute read Last month, Research Jam (AKA CHeP’s Patient Engagement Core) teamed up with their friends at All IN […] 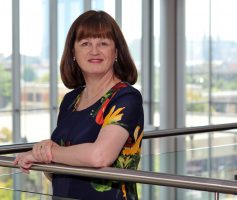 A valuable member of the CHeP Advisory Board, Sue Rawl has served since 2012. A professor of nursing at Indiana University, […]

Happy Holidays from CHeP! Check out our newsletter for the latest funding, events and other opportunities we’ve found for you. […]

Join our network Start your search
We use cookies to ensure that we give you the best experience on our website. If you continue to use this site we will assume that you are happy with it.OkPrivacy policy