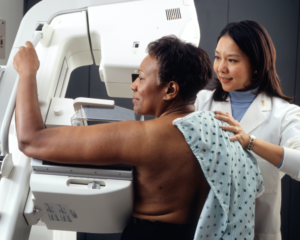 In honor of Breast Cancer Awareness Month, the Connections IN Health team is taking time to have serious conversations about the disparities of cancer rates among people of color. Breast cancer is the second leading cause of cancer deaths among women in the United States. Black women have the highest death rate of all racial and ethnic groups, with 42% more likely to die of breast cancer than white women.

A recently published white paper by the American Cancer Society’s Cancer Action Network complied the following research to give context to the growing breast cancer disparities within the U.S.

How Do We Reduce the Divide?

In the same paper, the Cancer Action Network discusses programs and policies that can work at both the state and federal levels to decrease disparities in breast cancer mortality in Black women. These include, but are not limited to:

To learn more about the Cancer Action Network’s work and programming around your area, visit their website.