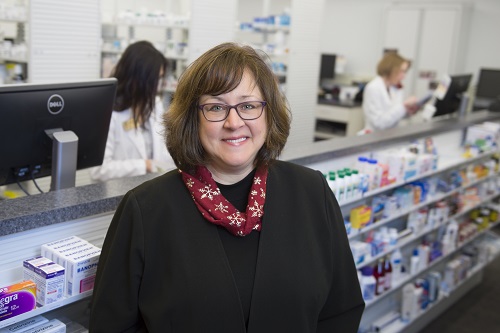 In 2018, Indiana fell three spots in two different categories in “America’s Health Rankings.” Overall, the state dropped to 41st, placing us near the bottom among the 50 states in terms of drug deaths, excessive drinking, obesity, physical inactivity, smoking and other measurements. The downward trend is impacted by the number of Hoosiers who smoke. In fact, six percent more Hoosiers indicate they are smoking compared to just two years ago. According to the annual state-by-state guide, that prevalence now ranks the state at 44th.

Not surprisingly, lung cancer is the leading cause of cancer mortality in Indiana, which motivates people such as IU Simon Cancer Center member Karen Hudmon, PhD, to work tirelessly to change that. Driven by her mother’s death at age 50 from lung cancer, Hudmon has played a key role in a national program that aims to better equip clinicians to help their patients quit using tobacco.

As faculty at Purdue University, an Indiana CTSI partner institution, Dr. Hudmon has led a team that developed Rx for Change: Clinician-Assisted Tobacco Cessation, a training program that teaches clinicians and students of all health professional disciplines – including pharmacy, medicine and nursing – not only how to help people quit smoking but to cease using all tobacco products. The program has become the most widely used tobacco cessation curriculum for training health care professionals in the nation.

That’s quite an accomplishment and one for which Hudmon and a colleague earned an award from the U.S. Public Health Service for their exceptional contributions and national impact on tobacco cessation education. More recently, Hudmon led a study and discovered that pharmacists and their staffs play an instrumental role in referring people to the tobacco quitline, 1.800.QUIT.NOW.

For the study, Hudmon evaluated the impact of two interventions on the number of pharmacy-based referrals to the tobacco quitline: On-site training for pharmacists and pharmacy technicians vs. mailed materials to pharmacies. Regardless of the intervention, pharmacy staff were more than willing to talk with people about their tobacco use and refer them to the quitline. And that brief encounter increased the number of quitline callers who reported hearing about it at a pharmacy by nearly twofold.

“These results were exciting because it was the first study to demonstrate that the pharmacy profession can make a measurable difference in the number of people who call the tobacco quitline for assistance,” Hudmon said.

How did the interaction work? “Pharmacy staff routinely asked patients about their tobacco use and advised tobacco users to quit,” Hudmon explained. “If they were ready to quit, the pharmacist provided counseling and/or referred them to the tobacco quitline.” And that’s an important step in helping people to stop smoking and using tobacco products, which improves their overall health and decreases their chances of developing cancer.

“I encourage individuals who smoke to consider their pharmacist as a resource when they are planning to quit,” Hudmon said. “Pharmacists can make recommendations and describe the proper use of cessation medications, which will make tobacco users more comfortable while quitting. They also can connect patients with the quitline for additional assistance. When medications are combined with help from the quitline, chances of quitting successfully are greatly increased.”

About the Author: James Dudley