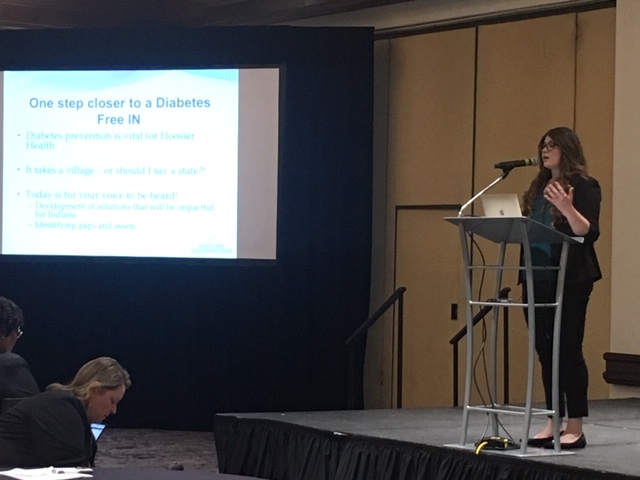 Expanding collaborations with the Indiana State Department of Health (ISDH) and the IU Simon Cancer Center, the Indiana CTSI Community Health Partnerships program has created Connections IN Health to help support a healthier population of Hoosiers.

Connections IN Health includes four coalitions focusing on healthy weight, asthma, cancer, and cardiovascular disease and diabetes. The coalitions are partnering with Purdue Extension, which works with more than 60 health coalitions across Indiana and has educators in all 92 counties.

The partnership with Purdue Extension will help Connections IN Health move toward the goal of increased engagement in local communities, said Jenna Wozniak, director of the Cardiovascular and Diabetes Coalition of Indiana (CADI).

Being part of the Indiana CTSI allows the coalitions to draw on evidence-based expertise from the Indiana CTSI investigators, however the intent is not to go into communities and dictate what happens, but to “act as an ally to local health efforts,” Wozniak said.

“Indiana is a pretty diverse state, we have urban and rural areas and everything in between. Different initiatives work differently in certain counties, or different areas of our state. The hope is that the coalitions can more deeply integrate themselves into local community efforts,” she said.

The goal is also to integrate plans prepared by different organizations into synergistic efforts. For example, in 2017 CADI, then affiliated with the Indiana Public Health Association, created the Better Together plan, a statewide strategic blueprint for broadly addressing cardiovascular disease, diabetes and stroke. Recently, the state health department has been tasked with creating a statewide strategic plan for diabetes prevention.

Wozniak has been asked to chair the prevention and screening work group for the state prevention plan, and in April helped organized and twice addressed the two-day Indiana Diabetes Prevention State Engagement meeting, sponsored by the state health department and National Association of Chronic Disease Directors.

“Once the plan is put together the Cardiovascular & Diabetes Coalition will be one of the key organizations helping to facilitate the implementation of the plan across the state,” she said.

Shortly after earning her Master’s of Science in Global Health from the University of Notre Dame, Wozniak joined CADI when it and the other Connections IN Health coalitions moved to the Indiana CTSI with funding from the Indiana State Department of Health.