Nancy J. Brown, MD, is this year’s winner of the August M. Watanabe Prize in Translational Research and will be honored at the 2021 Indiana Clinical and Translational Sciences (CTSI) Annual Meeting on Friday, September 24. She is currently the Jean and David W. Wallace Dean of Yale School of Medicine. 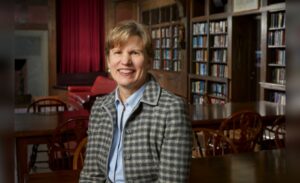 Brown has led a translational research program that focuses on developing new pharmacological approaches to prevent vascular disease in patients with high blood pressure and diabetes. Her research has defined the molecular mechanisms through which commonly prescribed blood pressure and diabetes drugs affect the risk of cardiovascular and kidney disease. In her clinical practice, she has treated patients with resistant and secondary forms of hypertension.

“I am honored and humbled to receive the 2021 Watanabe Prize,” said Brown, who is also the C.N.H. Long Professor of Internal Medicine at Yale School of Medicine. “The disproportionate impact of COVID on those with hypertension, obesity, and diabetes has once again highlighted the need to better understand the mechanism(s) underlying vascular injury and to optimize pharmacological interventions.”

Brown has continuously worked to promote the development of physician-scientists during her career. She founded the Vanderbilt Master of Science in Clinical Investigation program in 1999. As the Associate Dean for Clinical and Translational Scientist Development at Vanderbilt, she established infrastructure to support the development of physician-scientists and served as principal investigator for grants focused on faculty recruitment and development. During her tenure as chair of Medicine at Vanderbilt, she extended the infrastructure to support PhD scientists. By investing in faculty mentorship and sponsorship, Brown and her team at Vanderbilt increased the percentage of women leaders and faculty underrepresented in medicine (URiM) in the department. Now at Yale, she is working to make strategic changes to promote diversity, equity, and inclusion, as well as foster the success of faculty members who are traditionally URiM.

The Watanabe Prize is one of the nation’s largest and most prestigious awards recognizing individuals focused on shepherding scientific discoveries into new therapies for patients. It is named in honor of the late August Watanabe, a titan in the field of translational research in both academia and industry who impacted the health of people around the world as a leader at Indiana University School of Medicine and Eli Lilly and Company.

Watanabe began his career at IU in 1972 and served as chair of the Department of Medicine from 1983 to 1990. From there, he joined Eli Lilly and Company, where he was ultimately named executive vice president, overseeing the launch of 11 drugs and doubling the size of Lilly’s research and development staff.