INDIANAPOLIS — A local nurse has developed a medical device to help people with sickle cell disease, thanks to expertise from the Indiana Clinical and Translational Sciences Institute (CTSI). 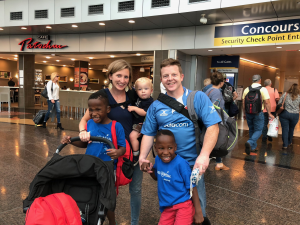 Abi Huskins and her husband, Jordan, with their three children, including Ivan (bottom right). (Photo courtesy of Abi Huskins)

Abi Huskins, a PRN nurse at Indiana University Health and the mother of a 7-year-old son who has sickle cell disease, worked with Jon Merrell, MD, director of the Indiana CTSI’s Clinical Care Innovation Accelerator, to find a way to solve a problem she noticed during the course of her son Ivan’s treatment.

Sickle cell disease is an inherited blood disorder that causes red blood cells to become misshapen (like a sickle), slowing and blocking the cells from delivering blood and oxygen to different parts of the body.

As part of Ivan’s treatment, he must get regular apheresis therapy, which involves removing blood through a needle or catheter, replacing his damaged red blood cells with donor cells, and circulating the donor red blood cells back to the patient with the other blood components through a return needle. It was during this therapy that Abi noticed Ivan’s new port site – a special entry point for the needles – didn’t provide him the traditional standard of care, which she knew called for a more enclosed, transparent cover during the transfusions.

Abi heard about the Indiana CTSI’s Clinical Care Innovation Accelerator from her husband, who had recently attended one of Merrell’s presentations, and she quickly reached out to Merrell about what she could do to start working on a solution.

“Abi has the unique position as an Indiana University Health nurse, but also as a mother to a child with sickle cell disease, and that gives her just the perfect perspective,” Merrell said. “She knows exactly what nurses know, and what nurses wish they had, and what the standard of care really should be for central line dressings. And then to be able to see the challenges her son has had with not being able to get that standard of care just because of limitations in current medical equipment.”

With Merrell’s help, Abi has invented a clear, enclosed cover, which she has dubbed Guard-a-Port, to protect Ivan’s port site. She developed prototypes, first, with Play-doh and then with help from mechanical engineering students at IUPUI, who used a 3-D printer to produce a plastic version of her design. Then, Merrell worked with local vendors to 3-D print a the clear version they have today.

Abi and Merrell are currently working on ideas for how to bring the new medical device to market.

Watch the video to learn more about Abi and her invention.

About the Author: James Dudley