“You may have heard of us as ‘CHeP’ before…” 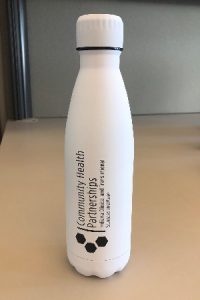 “People out in the community, or even people in academic setting who haven’t worked with us before, wouldn’t know what it stood for when we said, ‘CHeP,’” said Claxton. “The letters in the acronym are somewhat meaningless unless you get the full story of why we chose them. That’s when we first started transitioning to always saying, ‘Community Health Partnerships.’”

Claxton says that by saying the program’s full name, they’re able to communicate easier with people in the community, as well as others they work with professionally.

“CHeP didn’t mean anything to new partners,” said Claxton. “The acronym is just a sound, not a word. I think saying our full program title does a lot of the work for us, in helping to orient people more quickly to the mission of Community Health Partnerships. It says a lot of what we do right in the name. We’re focused on health and we address health by working in partnership with community organizations.”

Claxton says she believes streamlining the branding can be a good way to unite the various teams under the Indiana CTSI, like with using the new lockups.

“It will be a nice way to bring us together as a larger team,” said Claxton.